by Al Jazeera Apps News Released: Dec 2, 2011 Require: BlackBerry OS
The Arabic Satellite Channel, Al Jazeera's first news channel, radically changed how news was reported and issues debated in the Arab world. In the process the channel became the Arab region’s favored and key source of independent broadcast news. Over the fifteen years since its launch, it has offered unparalleled reporting from around the world including the conflicts in Afghanistan in 2002, Iraq in 2004, the 2008 war on Gaza and the Tunisian and Egyptian revolutions.

From its inception Al Jazeera has been transformative and ground-breaking – an institution that has given voice to the aspirations, concerns, and hopes of generations that where shackled by the chains of state-controlled media. In the process Al Jazeera has shown an enduring commitment to its values: independence, freedom, and the human right to knowledge.

With an extensive network of international bureaus spanning the globe, Al Jazeera’s Arabic channel has provided its regional and global audience with honest, in-depth and comprehensive coverage of Arab and international affairs. 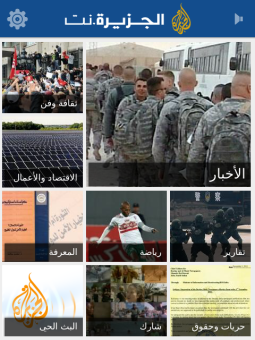 Scan to launch our Mobile App

Our network,
Interesting places to explore

Here you will find downloads for your BlackBerry phone. GPS and navigation app plus many other useful free utilities to enhance your phone. Themes for Bold, Curve, Torch, Tour and Storm BlackBerry smartphones. SMS tools to manager your messages and calendar appointments.
Advertise | Terms or use | Help | Contact Us
BlackBerry Download .net , Mobile Network 2015
BlackBerry® is a trademark of Research in Motion, Inc.